Nijo Castle, a UNESCO World Heritage Site in Kyoto, was the former residence of Tokugawa Ieyasu (1543 - 1616), founder and first shogun of the Tokugawa shogunate. The massive stone walls, the wide moat and huge gates of the castle are an impressive sight and a testimonial of the power of the Tokugawa clan, which ruled Japan for over 260 years.

 Explore Ryokans in Kyoto >
Ryokans are the perfect way to discover old Japanese culture and traditions. The flatland castle complex includes the Ninomaru Palace and gardens, two concentric rings (Kuruwa) of fortifications, Honmaru Palace and some support buildings. It covers an area of appr. 275000 square meters and is a great example of the architecture style during the Momoyama period (1573 - 1603).

How about exploring the UNESCO World Heritage Site Nijo Castle in Kyoto with an English-speaking tour guide. Check out this page > for more details.

Nijo Castle was constructed by shogun Tokugawa Ieyasu (1543 - 1616) in 1603. It took the effort by his grandson Tokugawa Iemitsu (1604 - 1651) to finish the castle complex 23 years later. In 1750 a five-storey castle tower within the Honmaru area was strucked by lightning and completely destroyed and never rebuilt. The end of the Tokugawa shogunate came in 1867 and the power went to the Imperial Court. Nijo Castle was used in the following years as the seat of the Imperial Palace. After the palace was donated to the city Kyoto in 1939 the public got access to it in 1940. Nijo Castle received the status of a UNESCO World Heritage Site in 1994.

How to get to Nijo Castle?

Karamon Gate - This large iconic gate with its gold-covered architecture marks the entrance to the Ninomaru-goten Palace. It was fully restored in 2013. The attention to the details in the woodcarvings of the gate shows the craftsmanship of that time. It was my personal highlight of the Nijo Castle visit.

Ninomaru-goten Palace - The palace, a National Treasure, is still in its original form and was built in the shoin-zukuri architectural style during the Edo period (1603 - 1867). The palace consists of six connected buildings with 33 rooms and more than 800 tatami mats (rice straw mats). Hinoki cypress was used as the main construction material. It was the official residence of the Tokugawa Shoguns during their stays in Kyoto. Enjoy the over 3600 amazing paintings at the walls and sliding doors (fusuma) by artists of the Kano school, beautiful decorated ceilings and the so called nightingale floors (uguisubari). These wooden corridors making a sound when you walk on them. It was the perfect security measure against intruders.

Ninomaru Garden - The shoin-zukuri style Japanese garden with a large pond at its center is a must-see for every visitor. There are 3 manmade islands within the pond called Kame-jima, Tsuru-jima and Horai-jima. Ninomaru Garden was created by the master garden designer Kobori Enshu (1579 - 1647). Best time for a visit is from March till April during the blossoming of the numerous cherry and plum trees.

Seiryu-en Garden - The garden is separated in 2 parts. You will find there a traditional Japanese Garden with two teahouses (Waraku-an, Koun-tei) and a Western-style garden with a spacious lawn area. Seiryu-en was built in 1965 and covers an area of more than 16500 square meters.

Honmaru-goten Palace - The 4 buildings (Genkan, Otsune-goten, Goshoin, Daidokoro and Kari-no-ma) were relocated in 1893 and 1894 from the former Katsura Imperial Palace by the order of Emperor Meiji (1852 - 1912). Before that the old palace was destroyed during the Great Tenmei Fire of 1788, rebuilt by Tokugawa Yoshinobu (1837 - 1913) and demolished in 1881. The palace complex covers an area of 20000 square meters and is open for the public only during special events in autumn. Honmaru-goten is designated as an Important Cultural Property by the Japanese government.

Honmaru-goten Garden - The garden is dating back to 1896.

Tonan Sumi-yagura - The watchtower at the southeast corner of the outer moat of Nijo Castle survived a huge fire in 1788 and was used as an observation post.

Higashi Ote-mon Gate - The East Gate of the castle was built in 1662. 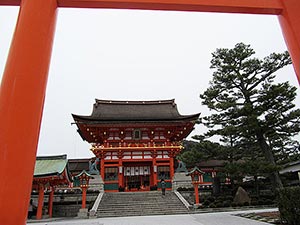 is known for its unique decoration.

"Nijo Castle is a UNESCO World Heritage Site since 1994.
It was built in 1603 as the Kyoto residence of the Tokugawa Shoguns. I was lucky enough to visit the castle during the cherry blossom season. It is one of the best Sakura spots in Kyoto."