Meoto-iwa or the "Wedded Rocks" is the name for a pair of rocks in Futami Bay. The rocks are located near the Futami-Okitama Shrine. The larger rock on the left is 9m high and represents the husband. The smaller rock to the right is 4m high and represents the wife. They are connected by 5 big sacred shimenawa ropes (made of rice straw). One rope is 35m long/10cm in diameter and weights 40kg. It is said that Meoto-iwa serves as a torii gate to worship the sacred Okimitama Shinseki, a large under water formation 700m off shore.

The shimenawa ropes ceremony started as early as the 14th century.

Meoto-iwa is located in the Mie Prefecture at the Futami Bay near Ise City.

How to get to Meoto-iwa?

view of sunrise - This place is famous for watching a sunrise between the rocks with Mt. Fuji in the background.

Oshimenawa Harikae Shinji (5th)
The Shimenawa Renewal Festival takes place 3times a year. This is one of the most important festivals for this shrine.

Where to stay in Futami near Meoto Iwa?

Hotels and Ryokans in Futami near Meoto Iwa 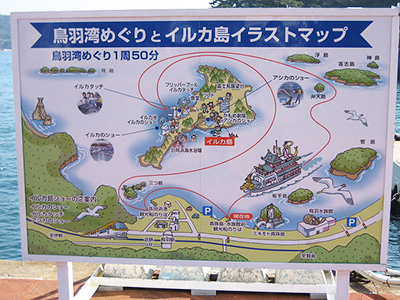 You will find there one of the largest aquariums in Japan. 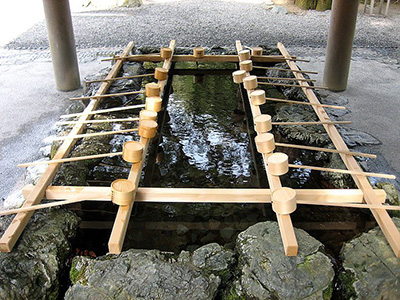 This is the most sacred place in the Shinto Religion. 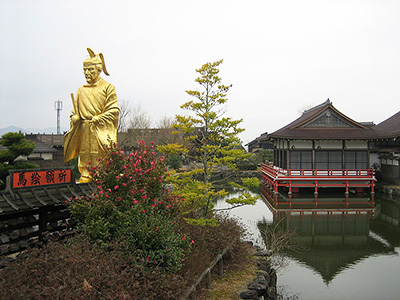 a theme park located at the Shima Peninsula.

"Also called the Wedded Rocks. You can find this place close to the small town Futami.
These two rocks represent husband and wife. They are connected by a rope (shimenawa), made out of braided rice stalks."

Best Ryokans in Ise and Toba

 back to Journey overview
next gallery Ise Shrine 