Fushimi Inari Taisha (Fushimi Inari Shrine) is one of the most popular, well-known, impressive and memorable Shinto shrines in all of Kyoto. The shrine is famous for its endless arcades of thousands of vermilion torii gates along the 4km pathway up the sacred mountain Inari (233 metres). The pathway connects the main shrine with the inner shrine. Do not miss the great view over the city from the top of Inariyama.

Explore Ryokans in Kyoto
Ryokans are the perfect way to discover old Japanese culture and traditions.

The head shrine of Inari represents app. 40000 Inari shrines throughout Japan. The shrine was dedicated to the gods of rice and sake and as the patron of prosperity in business. Btw each of the vermilion torii gates was a donation by individuals and companies. This tradition started during the Edo period (1603 - 1868). If you are interested to donate it will cost you "only" 1 million yen for such a gate. Many fox statues (kitsune), altars and fountains are visible all over the shrine complex. Foxes are considered as Inari's messengers of the gods (deities) with magical powers. If you look closely some of the foxes holding a key in their mouths. These are symbols of the keys for rice granaries (storehouses), which they have to protect.

How about exploring the beautiful Fushimi Inari-Taisha Shrine in Kyoto on a hidden path with a local guide. Check out this page for more details about this unique experience.

How to get to Fushimi Inari Shrine?

Honden - The main shrine building has the status of an Important Cultural Property. Honden was completely destroyed during the Onin War in 1468. The current structure is dating back to 1499. In total there are Five deities enshrined. The architectural style is called Uchikoshi Nagashi-zukuri.

Senbon Torii ("thousands of torii gates") - A 4km hiking trail starts with two parallel rows of over 5000 vermillion (ake) red torii gates. It is now the most famous feature of the shrine and walking through it gives many people a strong spiritual experience.

Okuno-in - The prayer building is located at the end of Senbon Torii. It is also known under the name Okusha Hohaisho. Okuno-in was built in 1499. The current structure is dating back to 1794.

Yotsutsuji intersection - Take a break on your hiking tour and enjoy the great view over Kyoto.

Inariyama (Mitsugamine) - After a longer hiking tour you will reach the top of the sacred Mt. Inari (233m above sea level). Take your time to enjoy the amazing view over Kyoto and the surrounding mountains. Inariyama consists of 3 peaks - Ichinomine (first and highest), Ninomine (second) and Sannomine (third). The deity Suehiro Okami is worshiped at Ichinomine. At Ninomine it is the deity Aoki Okami and at Sannomine the deity Shiragiku Okami.

Gozendani - The prayer area near the three peaks of Inariyama gets really crowded during the yearly Oyama-sai ceremony on the 5th of January.

Kiyotaki Falls - The waterfall is located near the Gozendani Hohaisho prayer area.

Teichoan - Take a break at the new rest area close to the Yashimagaike Pond. Teichoan was built in 2017. The Japanese architecture style is really traditional and the cafe inside worth a visit.

Hatsu-mode (New Year's first shrine visit) (first days in January)
Thousands of visitors come to the shrine to pray for good fortune and a successful year.

Oyama-sai Mountaintop Ceremony (5th)
Every year on the 5th of January a festival is held near the top of Inariyama. Sake will be offered to nakakumizake kuten (deity) during the ceremony.

Hatsu-uma Festival - First Day of the Horse (9th)
It is the largest festival of the year at the Fushimi Inari Shrine. It is dedicated to the fox deity Inari. A lot of rice cakes will be made during the festival and served to the visitors. People come here to pray for good luck for the year.

Sangyo-sai festival (lit. "Industry Festival") (8th)
This festival at the Fushimi Inari Shrine has the aim to ensure the prosperity of the nation's industry. On that day dances are performed and offerings are given in large quantities.

Inari-sai, Shinko-sai (20th)
Inari-sai is the most important shrine festival of the year. Portable Inari shrines are carried to the Shinto shrine area to receive blessings by the priest.

Aoi Matsuri in Kyoto (15th)
The highlight of this festival is a large parade from Imperial Palace through Shimogamo Shrine to the Kamo Shrines. More than 500 people wearing aristocratic costumes from the Heian Period (794 - 1185). The Aoi Matsuri belongs with the Gion Matsuri and Jidai Matsuri to the three most famous festivals in Kyoto.

Gion Matsuri in Kyoto (whole month)
The month July is full of different events like the Yoiyama - Kyoto's Magical Night (locals in kimonos look at the giant Gion floats the day before the parade) or the famous Yamaboko Junko (float procession on the 17th of July).

Jidai Matsuri ("Festival of Ages") in Kyoto (22nd)
People celebrate with a large parade between Imperial Palace to Heian Shrine the anniversary of the foundation of Kyoto. App. 2000 participants wearing historical costumes from different time periods. Enjoy this great festival which last around 2 hours.

Hitaki-sai Festival (Fire festival) (8th)
During the festival at Fushimi Inari bundles of prayer sticks with written wishes from worshippers will be set on fire. These holy bonfires will then destroy the sins of people and to grant wishes for good health and prosperity. Roughly 100000 prayer sticks will be burned during this event. are sent from worshippers in every region of Japan wishing for their good health and prosperity. 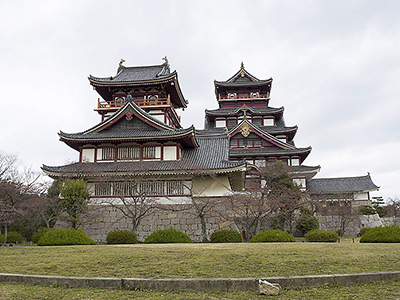 a concrete replica built in 1964

is one of the most famous in Japan

is the third highest wooden building in Kyoto 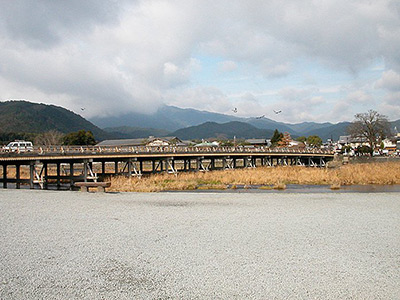 spans the Katsura River in the Arashiyama District

"Fushimi Inari-Taisha is the head Shinto shrine of Inari with a history of over 1300 years.
The shrine is famous for its thousands of torii gates behind the main building. I followed the trails to the sacred Mount Inari and enjoyed the beautiful scenery. It is really an iconic sight for Kyoto and Japan. Along the way you will find some sweet shops. You have to try out one of the unique fortune cookies there called tsujiura senbei. Little hint: The busiest time of the year for a visit is between January 1st and 4th. Many people go there for the Japanese New Year's first shrine visit."

 back to Kyoto overview
next gallery Gion District 