The Gion Matsuri or otherwise known as the Gion festival or the festival of the Yasaka Shrine is one of Japan’s biggest and most famous festivals held annually in Kyoto. It’s an event that is partly a street event and also bears a religious attachment to the people of Kyoto. As a visitor to Japan, you surely wouldn’t want to miss on such a great occasion. The impressive nature of this event is pointed out by its long, uninterrupted history. Initially, the festival was held to offer prayers to appease the gods for deliverance from natural calamities that had hit Kyoto for some time. The first Gion Matsuri was held in 869 mainly because of the devastating disasters including epidemics, earthquakes and floods that had happened. However, currently the event has become one of the most important days of celebration in the Japanese calendar not merely as a religious purification ritual but also as a way of showcasing the rich culture and way of life of Kyoto people.

On the three days before the procession, from the 14th to the 16th of July, the magnificent floats are brought outside onto specific sections of Kyoto’s streets most commonly Shijo-dori street between Kamo-gawa river and Horikawa-dori. The events are known as Yoiyoiyoi-yama (on 14th), Yoiyoi-yama (on 15th) and Yoi-yama (on 16th). The events are characterized by street closure, eating and drinking and young men and women wearing traditional customs.
On the 17th of July, between 9 and 11 am, the floats procession begins along Shijo-Karasama and Oike streets. As a visitor, you can enjoy the procession conveniently at street corners where you can delight in the magnificent floats. Some insignificant but still enjoyable events include the assembling of the floats from scratch on the 10th to 14th July and the second smaller procession of fewer floats (Ato Matsuri) on 17th to 21st of July which takes a reverse route from the main procession. So that is Gion Matsuri for you. As a world tourist with an interest in sampling different cultures, this special festival will surely give you a pleasant experience and open your eyes to the diversity of the Japanese way of life.

Gion Matsuri is held along Kawaramachi, Shijo and Oike streets in Kyoto.

How to get to Gion Matsuri?

Nishi Honganji Temple - The temple is a UNESCO World Heritage Site and part of the Historic Monuments of Ancient Kyoto.
more details >

Koshoji Temple - Is the head temple of the Kosho sect of Jodo Shin Buddhism, a school of Pure Land Buddhism.
more details > 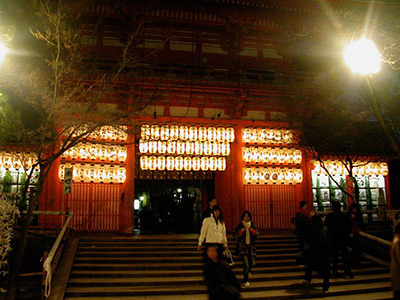 Is one of the most popular Shinto Shrines in Kyoto.

Is a designated Place of Scenic Beauty in Kyoto

Is the most famous geisha district in Japan.

"One of the highlights in the festival calendar of Japan is the outstanding Gion Matsuri.
I hope you can find the time for a Kyoto visit in July to enjoy the huge magnificent floats during the parades."

 back to Kyoto overview