Shoren-in, also known as Awata Palace, is the first out of five Monzeki Temples (Sanzen-in, Bishamon-do, Myoho-in, Manshu-in) of the Tendai sect in Kyoto. All the head priests (abbots) of these Buddhist temples were members of the Imperial family. Shoren-in belongs to Enryaku-ji Temple in Mt. Hiei, where the Tendai Buddhist sect was founded by priest Saicho (767 - 822).

Explore Ryokans in Kyoto
Ryokans are the perfect way to discover old Japanese culture and traditions. The temple is located within the Higashiyama district, near Heian Shrine, Chion-in, Maruyama Park and Yasaka Shrine. Shoren-in is dating back to the late Heian period (794 - 1185). The temple is full of national treasures and important cultural assets. Do not miss the special illumination of the temple grounds in spring and autumn till 10 pm. If you are lucky you can also witness a traditional koto (Japanese zither) concert.

The origin of Shoren-in lies at the top of Mt. Hiei, a mountain in the northeastern part of Kyoto. The founder of the Tendai sect Denkyo-daishi Saicho (767 - 822) constructed there some lodging facilities and temples for priests. One of the buildings was named Sho-ren-bo. This name was later used for the Shoren-in temple. The retired Emporer Toba (1103 - 1156) was a believer in the Tendai sect and decided to built a residence for himself and his 7th son Prince Kakukaishin-no (1134 - 1181), a disciple of the 48th Head Priest of Enryaku-ji with the name Gyogen (1097 - 1155), in Kyoto. He named the residence Shoren-in. Later his son became the head priest of this place. This appointment started a long tradition which remained till the beginning of the Meiji-era (1868 - 1912) and says that only members of the Imperial family could be head priests at the temple. The well-known priest Shinran (1173 - 1262, founder of the Jodo Shinshu sect) studied at the Shoren-in temple grounds with the age of 9. Empress Go-Sakuramachi (1740 – 1813) used Shoren-in as a temporary home (also called Awata-Gosho or Awata Palace) in 1788, after her Imperial Palace burned down in a huge fire. She used the building Kobun-tei as her study room. Unfortunately in 1993 Kobun-tei burned down, but was fully restored in 1995.

How to get to Shoren-in?

Kachoden - This drawing room offers great views to the garden with the Ryujin-no-ike Pond as its centerpiece. Enjoy also the sliding doors (called fusuma) with beautiful paintings of lotus flowers on it. Artist Kimura Hideki (born 1948 in Kyoto) created these masterpieces. Kachoden displays also pictures of 36 Tanka poets. Wooden walkways connecting Kachoden with the other main buildings of the temple complex.

Shijoko-do Hall - The hondo (main hall) contains the image/reproduction of blue Fudo Myo-O, which is an important national treasure. You can find also the replica of a mandala donated to the temple by the warlord Toyotomi Hideyoshi (1536 - 1598).

Shinden - It is the largest building at the temple grounds and full with items of the Imperial family. The exhibition is really impressive. I liked especially the sliding door (fusuma) paintings of pine trees. The building was a donation of empress Tokugawa Masako (1607 - 1678).

Kogosho - This building was the living quarter of the abbot (head priest).

Hiyoshi-sha Shrine - After passing a little bamboo forest you will find this hidden shrine. Its elevated location overs great views over the temple grounds and the city Kyoto.

Camphor Trees - The huge more than 800 years old camphor trees (kusunoki) at the entrance of the temple were planted by Shinran.

Night Illumination in Autumn at Shoren-in (1st - 10th)
The illumination at night of the garden and the colourful leafs are really beautiful. 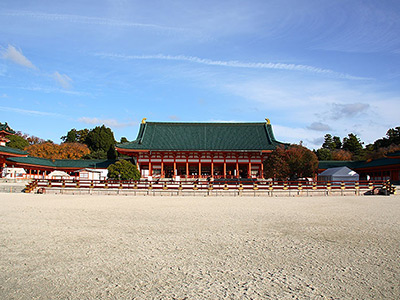 This impressive shrine was built in 1895. 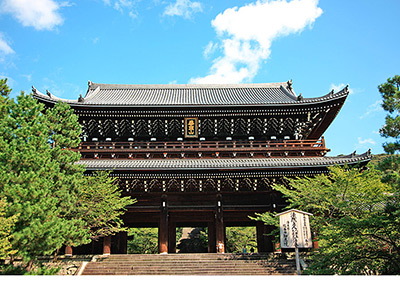 One of the most sacred sites in Japan. 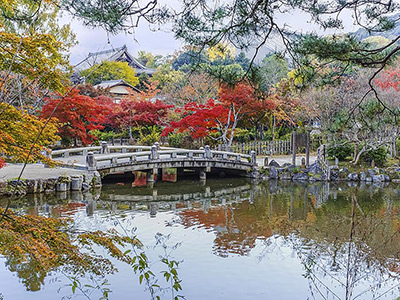 "The sight of the huge more than 800 years old camphor trees at the entrance of Sho-ren-in temple was really fascinating for me.
But the real highlights are waiting for you after the entrance gate. The two famous gardens at the temple grounds for example are masterpieces of Japanese landscape architecture. Overall a great experience and my must-see recommendation for you."

 back to Kyoto overview
next gallery Honen-in Temple 