Heian Shrine (Heian-jingu) is an outstanding Shinto Shrine in Kyoto and an important cultural property of Japan. The entrance gate (torii) of the shrine is with a height of 24,2 meters one of the largest in Japan and the impressive beams are 3,63 meters in diameter. In some parts the Heian Shrine is a replica of the Heian Palace (destroyed by a major fire in 1177). The honden (main shrine) is a 5:8 scale reduction of the original building. The shrine complex includes four landscape gardens, which cover an area of appr. 30000 square meters. The shrine buildings surrounding a huge gravelled courtyard. The best time for a visit is the cherry blossom season in Kyoto (mid April). Heian Jingu is also a very popular place for traditional Japanese weddings and believe it or not modern pop concerts.

Explore Ryokans in Kyoto
Ryokans are the perfect way to discover old Japanese culture and traditions.

How to get to Heian Shrine?

Heian Jingu gardens - The four gardens located behind the main building are a National Site of Scenic Beauty. It took gardener Jihei Ogawa 7th (also known as Ueji) over 20 years to complete 3 out of 4 gardens. In 1895 he completed the West and Middle Garden and in 1916 the East Garden. His masterpiece is the huge central pond (seiho-ike), which gets its water supply from the Lake Biwa Canal. In 1981 the South Garden was added.

Setsubun-sai at the Heian-jingu (3rd)
The day before spring starts is used to get rid of evil forces and bad luck and to prepare the family and home for the upcoming year. This cleaning ritual starts at 1pm and last till 4pm at the shrine grounds.

Annual Shrine Festival (15th)
The memory of Emperor Kammu will be celebrated with some traditional ceremonies.

Takigi Noh performances at the Heian-jingu (1st -2nd)
This is one of the oldest forms of Japanese musical theater. Enjoy the open-air stage and the unique atmosphere of ancient times. Important to know: The ticket sale starts in April. 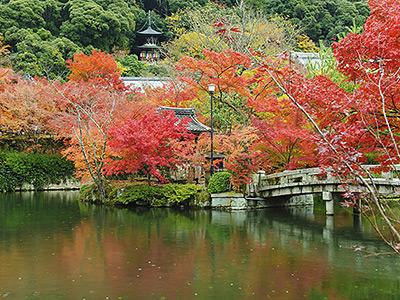 is one of the most popular spots in Kyoto during autumn. 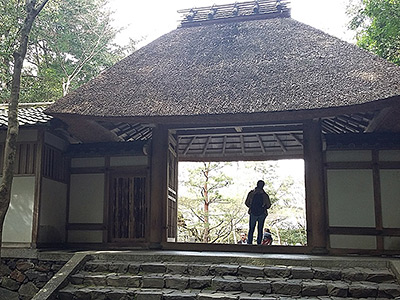 can be found near the Philosopher´s Walk.

"This impressive shrine was constructed in 1895.
This happened to be the 1100th year since the old capital of Japan Heian-kyo (Kyoto) was established."

 back to Kyoto overview
next gallery Nijo Castle 