Tofukuji is a Zen Buddhist temple and the head temple of the Tofukuji School of the Rinzai sect. It belongs to the Five Great Zen Temples of Kyoto (Kyoto Gozan), which are Tenryu-ji temple, Nanzen-ji temple (Supervisor Role), Shokoku-ji temple, Kennin-ji temple, Tofukuji and Manju-ji. The wording Tofukuji is a combination of parts of famous temple names from the city Nara. To - comes from the Todaiji Temple and fuku from Kofukuji Temple. It expressed the desire of its founder to match those temples from Nara in their greatness. The Tofukuji complex consists of 24 sub-temples and covers an area of 240000 m2, which makes it the largest in Kyoto. The place is known for its unique garden architecture, oldest Zen gate (Sanmon) in Japan, colourful leaves of its maple trees (momiji) during autumn and a 100 meter long covered wooden bridge with spectacular views. There are two paid areas which are Hojo (Abbot’s Quarters) and Tsutenkyo Bridge together with Kaisando Hall.

Tofuku-ji was founded in 1236 by Kujo Michiie (1193 - 1252), an imperial chancellor and a great statesman of the Kamakura period (1185 - 1333). It took him 19 years to complete these buildings. The monk Enni Ben’en (1202 - 1280) became the founding priest of the temple complex. The temple burned down in 1319, 1334 and 1336. The surviving Zen structures/buildings of the Muromachi Period (1333 - 1573) were Shoro (belfry), Zendo (meditation hall), Yokushitsu (bath) and Tosu (lavatory). During the 15th century the temple including the Sanmon Gate were rebuilt by shogun Ashikaga Yoshimochi (1386 - 1428). In 1881 a big fire destroyed the Main Hall (Hondo), Abbot’s Quarters (Hojo) and the Buddha Hall. Out of those 3 the Buddha Hall was unfortunetely never reconstructed. The Sanmon Gate got the status of a National Treasure Building in 1952.

How to get to Tofukuji Temple?

Tsutenkyo Bridge - This 100m long bridge is connecting Kaisando Hall with Hondo Hall and offers great views during the autumn season (mid November). The bridge is surrounded by appr. 2000 maple trees (momiji). The name of the bridge can be translated to - bridge crossing heaven.

Kaisando Hall (Founders Hall) - The mausoleum of the temple´s first head priest Enni Ben’en (1202 - 1280) is located here. You will find inside a statue of Enni. It is the perfect place for meditation and prayers. Do not miss the beautiful moos and rock gardens in-front of the building.

Sanmon Gate - The oldest Zen gate in Japan was rebuilt after a huge fire in 1425. It is with an height of 22 meter stretched over 2-stories a really impressive sight. On the top floor you will find many Buddhist statues made during the Heian Period (794 - 1185) by sculptor Jocho (died in 1057). Do not miss the beautiful paintings at the ceiling by Cho Dentsu, a.k.a. Mincho (1352-1431).

Hondo (Main Hall) - The hall was reconstructed in 1934. Inside you will find a painting of a dragon (Soryu-zu) at the ceiling by modern artist Insho Domoto (1891 - 1975). You can visit the Main Hall only from the 14th - 16th of March for the memorial of the death of Buddha. During the rest of the year the place is closed for the public.

Hojo (Abbot’s Quarter) - The current building is dating back to 1890. It was reconstructed after a huge fire in 1881. It is located at the center of the temple complex and for an entrance fee of 400 yen you are able to see the well-known Hasso Gardens.

Zen Hasso Gardens - These 4 gardens (Hasso-no-niwa) are located on the north, south, east and west side of the Abbot’s Quarter (Hojo). The garden designer Shigemori Mirei (1926-89) created these pieces of art in 1939. The moss and stone gardens are a great representation of modern Zen Buddhist gardens.

Southern Garden - The main features are four groups of rocks (representing the Chinese Isles of the Immortals) and artificial hills (representing the mountain temples of Gozan) in raked gravel. It is the largest of the four gardens.

Northern Garden - Here you can see seven cylindrical standing pillars in raked gravel re-used from the old foundation stones of the temple’s latrine. The pillars represent the constellation of the seven northern stars of the Big Dipper (or the Plough).

Zendo - The meditation hall was built in 1347. It is the largest and oldest in Japan and has the status of a designated cultural property.

Tosu - The oldest lavatory building in the country, dating back to the Muromachi Period (1333-1573) were used by more than 100 priests in the past. 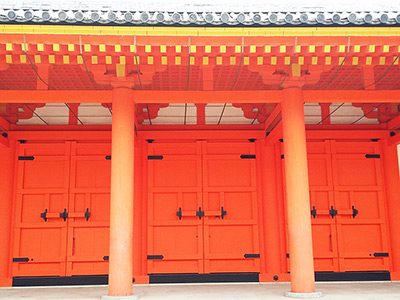 "Tofukuji Temple is a great place to visit, especially during the autumn season.
The colorful leaves of Japanese maple trees in the temple garden are a must-see for tourists and locals."

 back to Kyoto overview
next gallery Kyoto Tower 