Honen-in is an independent Jodo-shu temple. The small and beautiful temple can be found near the Philosopher´s Walk. Do not miss the famous Shoheki-ga paintings by artist Kano Mitsunobu (1565 - 1608). You will find these important cultural properties inside the Hojo building.

 Explore Ryokans in Kyoto >
Ryokans are the perfect way to discover old Japanese culture and traditions. The small spring in the garden is called Zenki-sui and has a well-known background story. The legend says that a priest with the name Nincho speared the ground and suddenly the water started flowing:) Important to know that the buildings are only open in April and November. The current chief priest of the temple Shinsho Kajita is known in Kyoto for his sense of community (Sanga). Honen-in is now a meeting place for artists and lovers of Buddhism. Enjoy monthly events like tea ceremonies, exhibitions and concerts. Little hint: everything is in Japanese. Last but not least famous people, like contemporary author Tanizaki Junichiro (1886 – 1965), poet Kawakami Hajime (1879-1946), philosopher Shuzo Kuki (1888-1941) are buried at the temple grounds.

In 1680 Honen-in temple was constructed by Nincho, the 38th head priest of Chion-in temple, under the guidance of his master Banbu. He thought Honen (1133-1212), a priest and founder of Pure Land Sect (Jodo-shu) of Buddhism, should not be forgotten and thats why the temple came to life. In 1207 Honen was forced to leave Kyoto. His practice of Jodo-shu was considered evil Buddhism at that time. In 1211 the ban was lifted and he could return to the city. One year later he died at the age of 78. During 1953 the decision was made to make Honen-in temple independent of the Pure Land Sect (Jodo-shu).

How to get to Honen-in?

Byakusadan (Terrace Of White Sand) - These two sand mounds near the entrance gate are needed to purify the visitors.

Sanmon Gate - The small entrance gate at Honen-in has a unique thatched roof.

koi pond - located at the back of the main hall, crossed by low bridges

small kura - the storehouse is the place of interesting art exhibitions

Spring Opening of Honen-in (1st - 7th)
Special opening of the Honen-in Temple buildings for the public during spring.

Fall Opening of Honen-in (1st - 7th)
Special opening of the Honen-in Temple buildings for the public during fall. 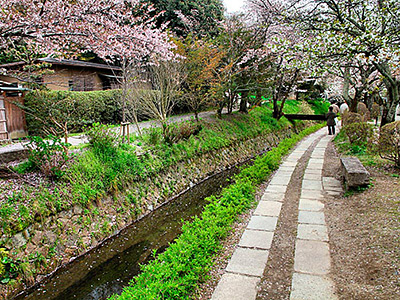 This famous walkway is a must-see.

is one of the most famous in Japan

is the third highest wooden building in Kyoto

"After following the crowded Philosopher´s Walk for a while I decided to explore small temples nearby.
Right after entering the Honen-in temple grounds through a lovely gate I felt like in a different world. The peaceful and relaxing atmosphere was really wonderful. My tip is to visit this place in the beginning of April to enjoy the blooming of the camellias."

 back to Kyoto overview
next gallery Konchi-in 