The Aoi Matsuri, otherwise known as the Hollyhock festival or the Kamo festival, is one of the three major annual festivals alongside the Jidai Matsuri and Gion Matsuri held in Kyoto. It is a festival for the Kamo shrines, the Shimogamo shrine and the Kamigamo shrine. Aoi Matsuri is regarded as the oldest festival of Kyoto.

 Explore Ryokans in Kyoto >
Ryokans are the perfect way to discover old Japanese culture and traditions. It dates back to the 7th century when a series of natural disasters occurred that were believed to have been caused by the gods of the Kamo shrines. The ruler of the time, Emperor Kinmei (509 - 571), made some rites to appease the gods and the disasters subsided. Since then, different rulers have made visits to the shrines. The Aoi Matsuri was established as a festival in the year 807. It reached its prominence during the Heian period (794 - 1185) and has continued to become one of Japan’s most important festivals.

The festival’s main focus is on the 15th where there is a procession and rites done at the shrines. The procession is usually led by the imperial messenger followed by ox-driven carts, horses, cows and 600 people. All people in the procession are dressed in traditional Heian regalia decorated with the leaves of the aoi (hollyhock), hence the other name of the festival. The procession on the 15th begins from the Kyoto Imperial Palace at around 10.30 heading to the two shrines. At the shrine, the Saio-Dai, a young female member of the imperial family, pays respects to the shrine with the imperial messenger acknowledging the god’s continued favor. Private proceedings are also usually held on each shrine which involves presenting the emperor’s petition and also a long period where gifts are given. As a visitor interested in Japanese culture, the Aoi Matsuri festival is one that you wouldn’t want to miss. If you wish to delight in the event, it’s appropriate that you catch the procession early at the start, at the imperial palace and during the rituals at the Kamo shrines.

How to get to Kyoto Imperial Palace?

Kitano Tenmangu Shrine - The shrine is dedicated to the politician, poet and scholar Sugawara no Michizane (845 - 903).
more details >

Kyoto Imperial Palace - The palace was home of the Emperor and its family till 1868.
more details > 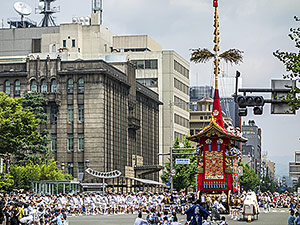 It is one of Japan’s biggest and most famous festivals.

Is one of the most popular Shinto Shrines in Kyoto.

Is the most famous geisha district in Japan.

"The Aoi Matsuri and Gion Matsuri are the festival highlights of Kyoto.
This ancient festival with more than 1000 years of history is my must-see recommendations for you."

 back to Kyoto overview