Tokyo University (Todai) is the most prestigious university in Japan and belongs to the top 20 in the world. Appr. 30 000 students attending this place and its 10 faculties.

Explore Ryokans in Tokyo
Ryokans are the perfect way to discover old Japanese culture and traditions. It is btw a huge challenge to get in. The main campus of the university (in total there are 5) is really worth a visit. Book a tour with a student and explore the history of the Tokyo University. Do not miss the Akamon (Red Gate) and Sanshiro Pond (known as Ikutokuen Shinji-ike).

Tokyo University was founded in 1877 by the Meji government. The campus of the university was in the old days the Tokyo residence of the Maeda Clan of feudal lords from Kaga (Ishikawa Prefecture). In 1887 the name was changed to Tokyo Imperial University and in 1945 the naming was reverted to Tokyo University. Large parts of the campus were destroyed during the major earthquake in 1923.

How to get to Tokyo University?

Sanshiro Pond (Ikutokuen Shinji-ike) - The pond and its surrounding Ikutokuen Garden was built in 1638. Toshitsune Maeda, 2nd Lord of the Kaga Domain gave the order for the construction.

Akamon Gate (Red Gate) - The Red Gate, an Important Cultural Property, was built in 1827 for Yasuhime. She was the daughter of Shogun Ienari Tokugawa and after her marriage with a member of the Maeda Clan the gate was constructed. In 1961 Akamon was renovated.

Komaba Festival (21st till 23rd)
The biggest school festival in Japan with nearly 130 000 visitors every year is an highlight you should not miss. Enjoy 500 food stalls, performances and events all over the campus. 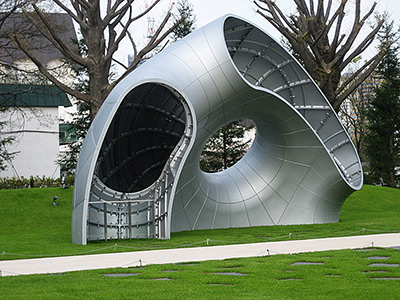 "I really enjoyed my visit at the Tokyo University campus.
At first you will recognize the many Gingko trees everywhere. These trees have become the symbol of the university. Take your time to explore all the interesting places at one of the best universities in the world."

 back to Tokyo overview
next gallery Rikugien Garden