The term Rikugien means Garden of Six Elements of Poetry and contained reproductions of 88 well-known landscape scenes that are mentioned in popular poems.

 Explore Ryokans in Tokyo >
Ryokans are the perfect way to discover old Japanese culture and traditions. The Rikugien Garden has a huge circular pond in the middle that is bordered by an amazing landscape which consists of forests and hills, as well as trails that make it easier to explore the area. The landscaping technique is called Kaiyu-shiki Tsukiyama Sensui Teien. The Rikugien Garden covers an area of nearly 10 hectare and is popularly known for the weeping cherry trees and autumn leaves that help to transform the garden into a paradise. Visitors at the garden get to enjoy an ever changing landscape that is characterized by autumn foliage although the 15 meters tall Shidare cherry blossom tree is perhaps its greatest attraction. The autumn leaves are especially stunning around the stream that runs next to the Chaya teahouse, which is located close to the Togetsukyo Bridge. For those that love history and architecture, the garden is also a great representation of what architecture looked like during the Edo Period. Do not miss the illumination at night (until 9:00 pm) during cherry blossom season and autmn foliage.

The garden was built by feudal lord Yanagisawa Yoshiyasu (1658 - 1714) during the Edo Period. Yanagisawa Yoshiyasu was given the mandate to construct the gardens in 1695 after he was given the land by the then 5th Shogun known as Tokugawa Tsunayoshi. Yanagisawa Yoshiyasu’s love for Japanese poems is what inspired him to design the Rikugien Gardens to represent the scenes included in the poems. The construction of the Rikugien Gardens was finished in 1702 complete with a man-made hill (tsukiyama), as well a river and a lake (sensui). During the creation of the garden, Samurai Yanagisawa Yoshiyasu designed the gardens to reflect 88 famous settings in poems; however, only 18 can be enjoyed today. Iwasaki Yatoro (1835 - 1885), the founder of the Mitsubishi group purchased the park in 1878 and started restoring it. Later his younger brother Iwasaki Yanosuke (1851 - 1908) finished the project. Rikugien was donated in 1938 to the city of Tokyo to become a public park. In 1953 the garden was declared a special place of scenic beauty by the Japanese government.

Rikugien Garden is located in the quiet neighborhood of Sugamo and Komagome in the north of central Tokyo.
Address: 6-16-3 Honkomagome, Bunkyo-ku, Tokyo

How to get to Rikugien Garden?

Fukiage Chaya teahouse - It is a great resting point if the walking around becomes too tiresome. Enjoy a matcha-tea for 510 yen and some Japanese sweets (nama-wagashi).

Fujishirotoge Viewpoint - The artificial mountain pass with an height of 35 meter offers you great views over the garden.

Togetsukyo - Two large rocks were used the create this bridge, which is leading to a man-made island in the middle of the lake. Togetsukyo was named after a famous Waka poem.

Shidare Sakura - The weeping cherry trees located right after the main gate are one of the biggest attractions within the Rikugien garden.

Shinsentei teahouse - Another beautiful teahouse and the perfect spot for a little break.

Naka-no-shima - You can find on this small island two hills with the name Imo-yama and Se-yama. Those hills represent the mythical male (Izanagi) and female (Izanami) deities based of ancient Japanese believes.

Garyu-seki - This rock within the large pond is representing a sleeping dragon.

Naitei-Daimon - It is the only remaining seawater pond within Tokyo.

Autumn Evening Illumination
The illumination at Rikugien Garden should be a must-see on your Tokyo sightseeing list. 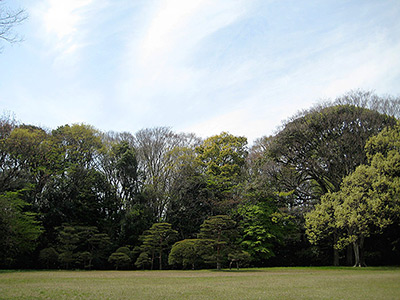 is Tokyo's oldest public park and was founded in 1873. 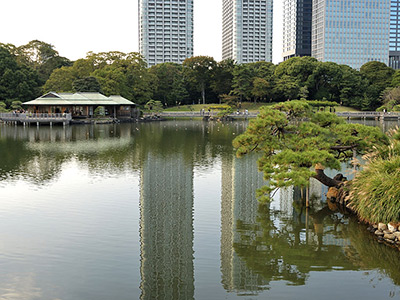 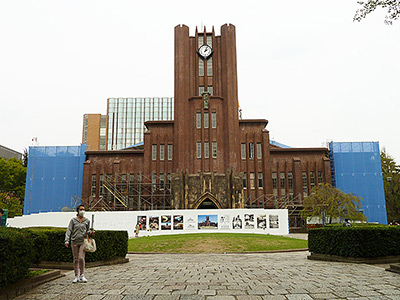 the most prestigious university in Japan.

"The Rikugien Garden is considered by many locals and visitors to be one of the most beautiful and picturesque gardens in Tokyo.
The garden is quite large, which means that it takes about an hour to explore the entire area if you walk at a leisurely speed. The trails are well distributed all through the garden and through the open lawns as they lead to the various tea houses that are open to the public."

 back to Tokyo overview
next gallery Shimokitazawa 