Hiroshima Castle (Hiroshima-jo) is a major tourist attraction in Hiroshima. Another name for this typical flatland castle is Carp Castle. The originally wooden structure consists of 5 stories and the height of the main donjon (main tower) is 26,6 meters.

Explore Ryokans in Hiroshima
Ryokans are the perfect way to discover old Japanese culture and traditions. The total floor area is 1359 square meter. The castle, surrounded by a moat, is housing now a history museum with exhibitions about Hiroshima before World War 2.

Mori Terumoto, a powerful daimyo (local feudal lord), built the castle in 1589. After his defeat in the Battle of Sekigahara (1600), his former ally Fukushima Masanori took over the castle. In 1617 a huge flood caused major damage to the structure of Hiroshima Castle. It was rebuilt 2 years later. Hiroshima-jo survived the Meiji Restoration and became a National Treasure in 1931. During World War 2 the castle was destroyed by the atomic bomb explosion on the 6th of August 1945. In 1958 the decision was made to reconstruct the castle in ferro-concrete. In 1994 the reconstruction of the wooden outer citadel was completed. These days the restoration efforts are focused on the Ninomaru (second circle of defense incl. the main gate).

How to get to Hiroshima Castle?

Observation Platform - located at the 5th floor, enjoy the great view over Hiroshima

Peace Memorial Ceremony (6th)
The city of Hiroshima holds this event to remember the victims of the atomic bomb attack and to pray for world peace in the future. At 8:15 am (time when the bomb exploded) the Peace Bell is rung and for 1min the life stands still in Hiroshima.

Hiroshima Food Festival (25th till 26th)
The festival is held at the castle grounds. During those 2 days you are able to taste the best food from all over the Hiroshima prefecture. It is so delicious.

Where to stay near Hiroshima Castle?

Hotels and Ryokans near Hiroshima Castle 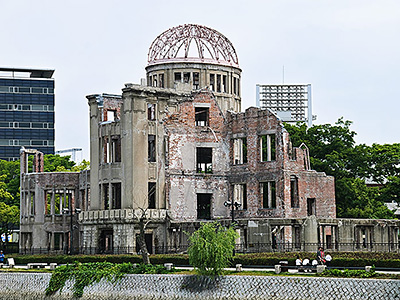 is a very moving place to visit and keeps the memory alive.

"Hiroshima Castle was destroyed through the atomic bomb in 1945.
The reconstructed castle will be one of your highlights during your visit in this beautiful city."

 back to Journey overview
next gallery Fukuyama Castle 