Isuien Garden is a beautiful Japanese Garden in Nara and covers an area of 13481 square meter. It is the only promenade or walking garden (kaiyushiki teien) in the city. Isuien stands for "garden founded on water" and has the status of a Famous Scenic Spot of Japan. The strolling garden consists of two parts (front and back garden), which were created in two different time periods and later joined together.

Explore Ryokans in Nara
Ryokans are the perfect way to discover old Japanese culture and traditions. You will find in the garden beautiful pagodas, three ponds, thatched tea houses, a wooden water mill and a small Inari Shrine. Isuien is the perfect example of the borrowed scenery style (shakkei). It uses the Todaiji Temple Nandaimon Gate, Mount Wakasayama, Mount Kasugaokuyama, and Mount Mikasayama in the background to visually extent the garden. The water source for the streams and ponds of the Isuien Garden is the Yoshikigawa River.

Michikiyo Kiyosumi, a wealthy textile merchant, bought the front garden property during the Edo period (1603 - 1868) in 1670 (Kanbun era) and redesigned the place. In 1899, during the Meiji era (1868 - 1912), the rear part of the Isuien Garden was completed. The garden was designed by Yumyosai (head of Urasenke school) on behalf of Tojiro Seki, a rich merchant from Nara. In 1939 Jyunsaku Nakamura bought both properties and combined them. He was looking for a location for the Neiraku Museum.

How to get to Isuien Garden?

Sanshutei Tea house - During the 1670s Kiyosumi Dosei relocated this house to Isuien Garden as his secondary home. The view of the Front Garden is amazing and you should enjoy some snacks and green tea there.

Seishuan Tea house - The Seishuan Tea house is the exact replica of the famous Yuin Tea House, a important cultural property, created by the Urasenke family. It was built with the support of the great tea master Jikisho Genshitsu (Yumyosai).

Hyoshintei Tea house - The tea house was constructed in the early twentieth century. It was used for traditional tea ceremonies. Interesting to know that some of the construction material came from the Shin-Yakushi-ji Buddhist temples original wooden boards. From there enjoy the nice view of the Back Garden.

Teishuken Tea house - The tea house with its unique circular window is dating back to the 1670s. It was built by Kiyosumi Dosei. In the late 19th century some new features, like a nice terrace, were added to the structure by Seki Tojiro.

Yagyudo - This building was relocated from the Hotoku-ji Buddhist Temple in the beginning of the 20th century under the guidance of Seki Tojiro.

You will find approx. 2000 stone laterns along the path. 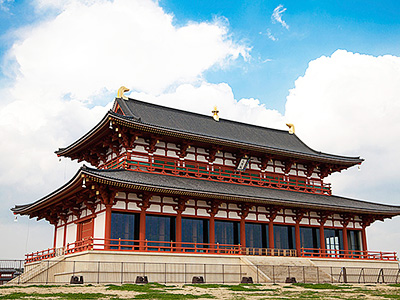 "The garden of Isuien is a designated Famous Scenic Spot of Japan.
The beautiful scenery with three ponds, tea houses, water mill and a small Inari Shrine will easily take you back in time. Enjoy this quiet moment."