Matsue Castle is a five tiered hilltop castle located in Matsue, Shimane prefecture in Japan. It is the second largest, the third tallest (30m) and the sixth oldest castle amongst the Japanese castles. It is one of the few remaining castles in Japan that is not a modern reconstruction in concrete but rather of the original wood form. Matsue Castle belongs to the 12 remaining medieval castles in Japan and the only one in the Sonin region. It is nicknamed ‘plover castle’ or the ‘black castle’ and my must-see recommendation for you, especially during the cherry blosom season. Do not miss the amazing view from the top floor over Lake Shinji (Japan's 7th largest lake), the city and the beautiful surrounding area.

It was built by Horio Yoshiharu between 1607 and 1611, after the last great feudal war of Japan. Its ownership was transferred to Matsudaira Naomasa, who became Lord of the castle. The Matsudaira clan owned Matsue Castle for a period of 234 years. All the buildings within the castle were dismantled in 1875 with the exception of the castle itself which underwent reconstruction between 1950 and 1955. On 9th July, 2015, the castle was named one of Japan’s national treasures.

How to get to Matsue Castle?

Matsue Castle Museum - Learn more about the history of the castle. Enjoy the exhibition of arms and armor used during the samurai era.

Horikawa Sightseeing Boat - The tour circles the historical inner and outer moats as well as any other points of interest that cannot be seen otherwise. The moats are located within the park Jozankoen. Sometimes the boat passes under lowly built bridges and as such the passengers have to watch their heads.

Samurai Residence and Shiomi Nawate Street - The Samurai residence is now open for the public. It is the perfect place to learn more about life as a middle-class Samurai in Edo period. The residence is located in the middle of the 500feet Shiomi Nawate Street. The street is lined with traditional Japanese houses and majestic pine trees. The former residence of Lafcadio Hearn, his memorial as well as Tanabe Museum are located along the same street.

Horan-enya Festival (once every 10 years, next is May 2019)
It’s one of the three most popular boat festivals in Japan and its history dating back till 1648. It involves processions of colorful boats on the Ohashi River, which protect the boat carrying the deity from Jozan Inari Shrine to Adakaya Shrine. During the 9 days of the festival you can enjoy traditional ceremonies, dance performances, local people wearing beautiful costumes and much more. Interesting to know that the preparation for Horan-enya takes at least one year.

Matsue Suigosi Fireworks Festival (last weekend of July, first weekend of August)
People wearing jinbei and yukata sit on the shores of Lake Shinji and marvel at it as the surface of the water is lit up by fireworks. Performances and dance events are also held on stage by Matsue City Hall. Fireworks will start usually around 8:00 pm.

Oyukake Jizo Festival (24th)
It takes place at the hot springs of Matsue Shinjiko Onsen and is a dedication to Oyukake Jizo, the local hot spring deity. Later the fireworks over Lake Shinji will start at 8:00 pm.

Matsue Do Gyoretsu Drum Parade (third Sunday of October)
The city is full of the sound of the echoes of these giant drums (diameter 2 m). Children wearing traditional costumes and pulling the drums through the streets. I can only say prepare your ears:)

Where to stay near Matsue Castle?

Hotels and Ryokans near Matsue Castle 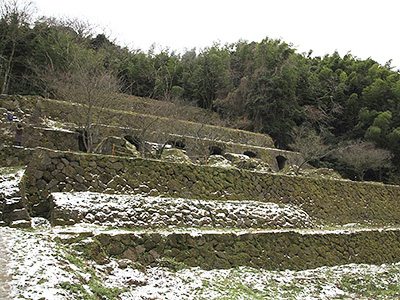 The UNESCO World Heritage Site was the largest silver mine in Japan.

"In 2015 the people of Matsue had something to celebrate.
It was the announcement to give the Matsue Castle the status of an National Treasure by the Japanese Gouvernment. There are only 5 castles with this title in Japan."

 back to Journey overview
next gallery Omori Town 