In Japan, Aomori Nebuta Matsuri happens to be one of the most spectacular and colorful festivals held in August, each year without fail. It is one of the most famous festivals around, and also happens to be among the Three Greatest festivals of the Tohoku, Japan Region known as the Sandai Matsuri. The festival is held in Aomori City, located at the Northern tip of Honshu in the Tohoku area. The area is famous for its historic castle, Hirosaki-jo, as well as its apples. Though historians cannot agree on how the Aomori Nebuta Matsuri began, there is a belief that the nebula floats were an invention of General Sakanoue used during the battles of 800’s. It is believed that the General, together with his army created gruesome creatures from bamboo and cloth with the aim of scaring away their enemies.

The festival is colorful and features enormous floats illuminated using lanterns. Nebuta is a term used to refer to the floats all which feature mythical Japanese characters, kabuki actors as well as samurai warriors. As the floats get paraded, they are accompanied by taiko dancers and drums dressed in traditional costumes referred to as haneto. The highlight of Aomori Nebuta Matsuri is the final day of the festival when the floats get pulled around the city by chanting participants organized into teams. The floats, which take a year to design and built, are constructed by local groups using painted washi paper placed over bamboo frames. Hundreds of light bulbs are then woven through the floats so as to illuminate the parade. People attending the festival are always encouraged to participate in the proceedings, and people wearing haneto costumes get invited to join the festivities. Costumes can be purchased in shops located around the city, or rented for the day from stores located on the festival route. A parade takes place each night starting at sunset when floats get wheeled into the streets of downtown Aomori. On the last Aomori Nebuta Matsuri festival day (August 7th) the action starts at noon and lasts up to three in the afternoon. It is a festival that you would not want to miss as it attracts millions of visitors from all over.

Aomori is located at the northern tip of the Honshu Island.

How to get to Aomori?

Nebuta Matsuri (2nd till 7th)
One of Japan's most famous festivals with thousands of visitors is a must-see during your stay. Huge illuminated floats are carried through the city, accompanied by dance and singer perfromances.

Where to stay in Aomori?

Hotels and Ryokans in Aomori

This rocky coastline is a hiking paradise. 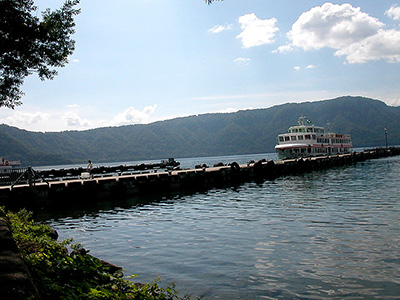 The Lake is located in the crater of an extinct volcano. 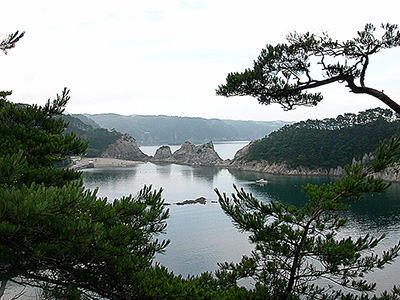 a scenic hightlight of the Rikuchu Kaigan National Park.

"This festival is an absolute highlight and one of the best in Japan. "

 back to Aomori