The ancient Buddhist temple of Ishiyama-dera is located in Otsu (Shiga Prefecture). It is the 13th out of 33 sacred temples located on the Saigoku Kannon Pilgrimage. The temple belongs to the To-ji Shingon sect, which is one of the Buddhists sects in Japan. The Ishiyama-dera Temple played a vital role in unifying all other temples during the Nara and Heian period as it acted as the headquarters of the Shingon Buddhist sects. The Ishiyama-Dera Temple means the Stone Mountain temple when translated into the local language. The place is well known for its breathtaking scenery called Ishiyama Akizuki. This scenery can be found in the amazing artworks of the 8 beautiful views (omi hakkei) of the Lake Biwa coast by ukiyo-e artist Utagawa Hiroshige (1797 - 1858). Many Important Cultural Properties and National Treasures can be found at the temple grounds like a 2-storied pagoda, Buddhist statues, religious texts and much more.

The temple was built during the Nara period (710 - 794) by the Buddhist priest Roben (689 - 773) on behalf of Emperor Shomu (701 - 756). Ishiyama-dera was built on top of a massive formation of wollastonite, a for Japan very rare material. During the Heian period (794 - 1185), the temple would host Buddhist pilgrims from all over the region. Thousands of pilgrims would make a stopover to rest at the temple, where they would often use the Kannon-do hall for prayer. Authors such as Sei Shonagon and Izumi Shikibu were fond of including the Ishiyama-dera Temple in some of their stories, which helped the Temple to gain popularity in the rest of the country. Famous authors such as Murasaki Shikibu, who is well known all over Japan for her book ‘The Tale of Genji’ is reported to have stayed at the Ishiyama-Dera Temple. Famous Haiku poet Matsuo Basho, as well as novelist Toson Shimazaki, has also stayed at the temple.

How to get to Ishiyama-dera?

Treasure Tower (Tahoto) - The tower is the oldest of its type in Japan and was built during the Kamakura period (1185 - 1333) by shogun Minamoto no Yoritomo (1147 - 1199). The pagoda is also designated as a National Treasure.

Statue of Murasaki Shikibu - This statue was built to honor the author of the famous Tale of Genji.

Main hall (hondo) - The hall contains an image of Nyoirin-Kannon (Goddess of Mercy) and is designated as a National Treasure by the Japanese government.

Todai-mon - The gate is an Important Cultural Property.

Ishiyama-dera Temple New Year's Bells (31st)
The sound of the temple’s bell (an Important Cultural Property) is well known for its amazing sound when rung. Did you know that the first 108 visitors to arrive on New Year’s Eve have the right to do one of the 108 strikes.

is one of the most popular places for tourists in Japan. 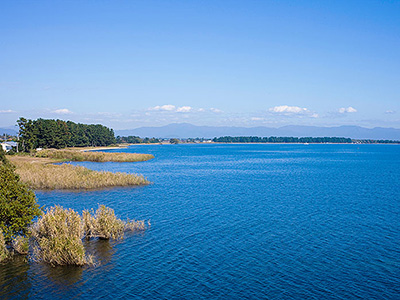 is the largest freshwater lake in Japan.

"Isiyama-dera Temple is considered to be one of the most sacred temples in Japan, along with Kiyomizu-dera temple in Kyoto and Hase-dera Temple in Sakurai.
The location near Lake Biwa is breathtaking and you should visit the temple grounds during the Cherry Blossom season."